Why We Bought A 41 Year Old Apache Camper

Last week I posted about our maiden voyage in our new camper. I might have briefly mentioned that our camper is 41 years old, which might lead you to ask why on earth would we buy a camper that was born in the early 70’s? 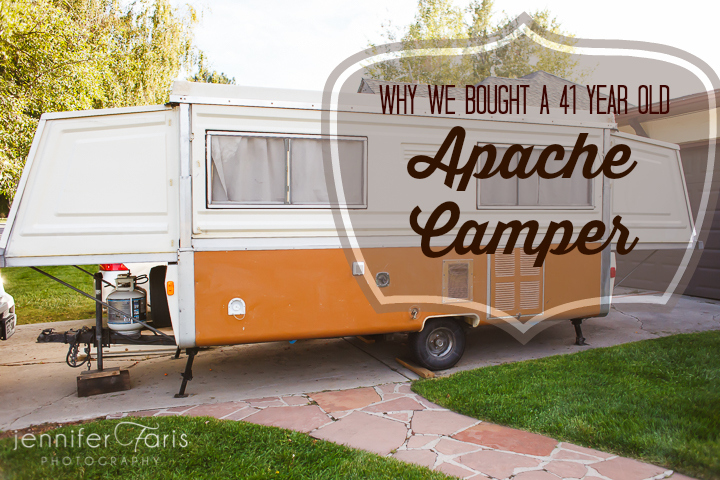 It all started with my neighbor…

I was starting to search online for campers but having exactly ‘zero’ experience or knowledge about them I was feeling a little lost. Then I noticed in my neighbors driveway the coolest looking camper. It was very ‘retro’ looking yet still looked to be in great shape. We bumped into them one night at the local ice cream shop so I asked them if they had any advice on campers.

That’s when she said the magic words. She said there’s was a 1976 Apache (meant nothing to me) and that it was a hard side.

Hard side?  As in no canvas to deal with? As in keeps you even warmer and dryer?

So I started searching for Apaches on Craigslist. And go figure, there a little far and few in between. I wasn’t going to be too picky about how clean the inside was knowing that I would be fixing it up anyway. But I wanted one that was mechanically in good shape.

After about a month one finally popped up, a 73 Apache Ramada 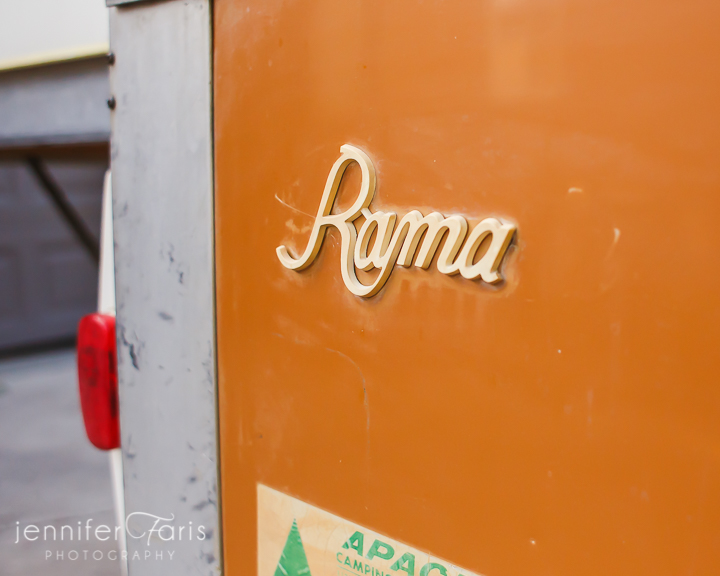 We grabbed Uncle Randy (smartest decision ever) and he took us to meet the owner. We could tell pretty quickly that this guy really loved the camper because he referred to it as ‘she’. He had cleaned and oiled the lift system, installed a new axle, new tires, LED lights running on a nice marine battery…you know, all the boring stuff! On the other hand, it had been stored in an RV storage in a field for most of the summer so make no mistake, it was gross as mice had taken over. Ew-ew-ew.

But like a good rehab addict I saw past the mice poo and gave the nod to Uncle Randy who then negotiated a sweet deal for us (you da man Uncle Randy). We towed her home and once I got up the guts, we popped her up and so began the grossest two days of scrubbing of. my. life.

It’s clean though, really really clean. As in baking soda, vinegar and disinfecting wipes touched every square inch of space. Next I switched gears and got to the fun part of rehab. I’ll be detailing the new floors, curtains and countertop in separate posts but for now lets just enjoy how comfortable and clean it looks. 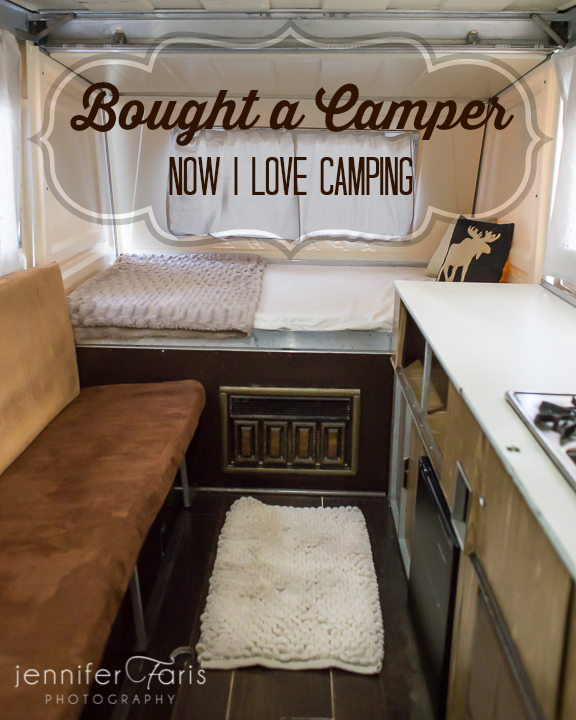 There’s plenty of room in here, supposedly it sleeps 8 but the 5 of us is plenty to fill it up. 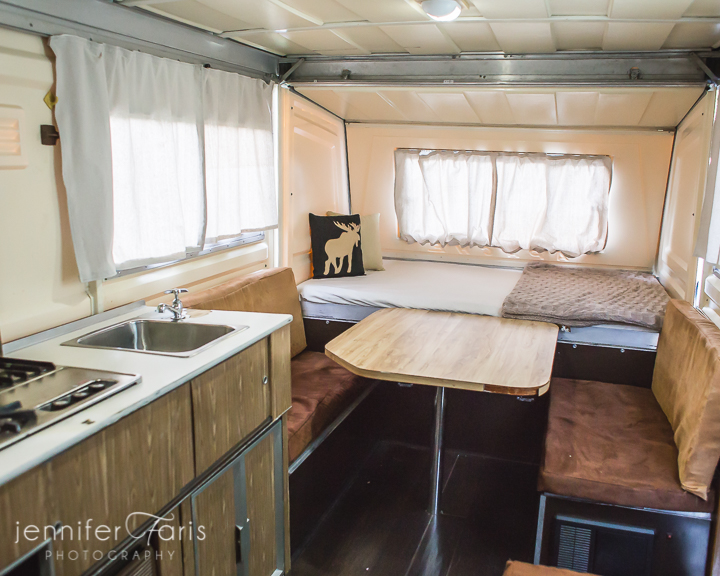 I plan to recover the cushions with something wipeable (read – I have messy kids) and I still have quite a few small projects to finish up (as you can see from the laminate pealing off of the corner of the table) but those are details that aren’t stopping us from taking her out again this weekend. 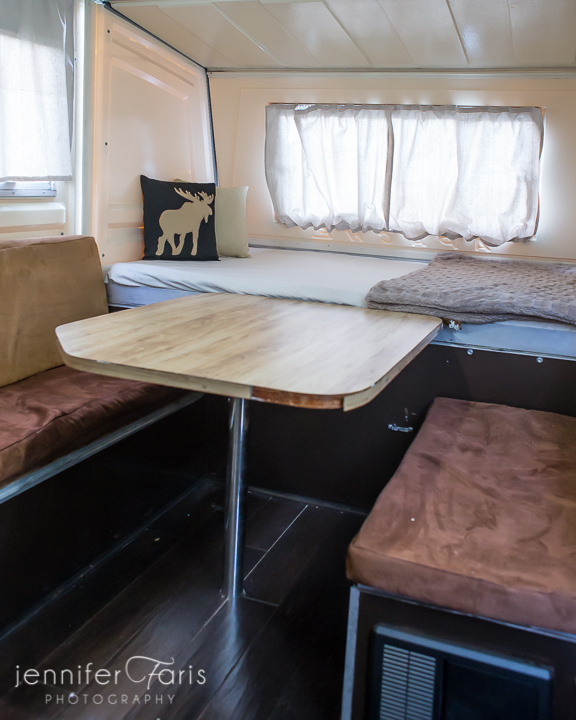 I love how it’s cozy but functional. There’s A/C, a heater, a sink with a water pump, 3 burner stove, a dorm fridge…and I can’t neglect to mention this super cool Apache level on the outside. 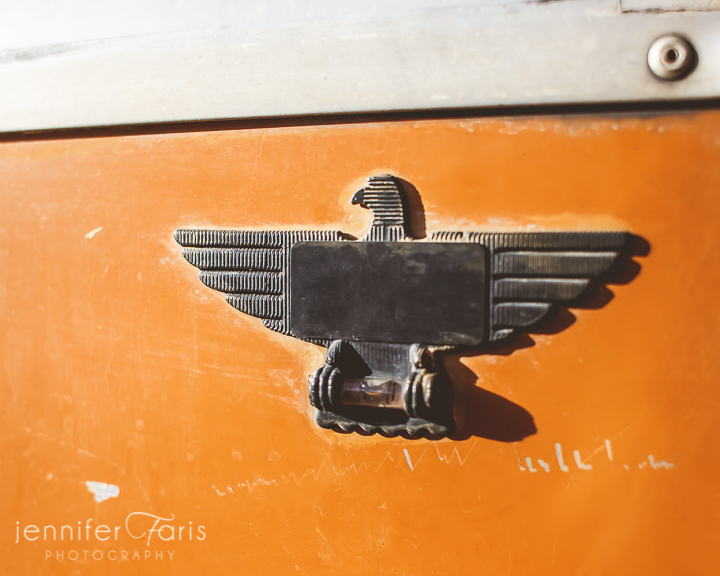 So why buy a camper older than me? Because it’s built to last. Because my kids love it so much they want to move in. Because it’s going to take us on many new adventures…stay tuned!